Vodafone Asantehene Golf Open: A teeing off fit for a king 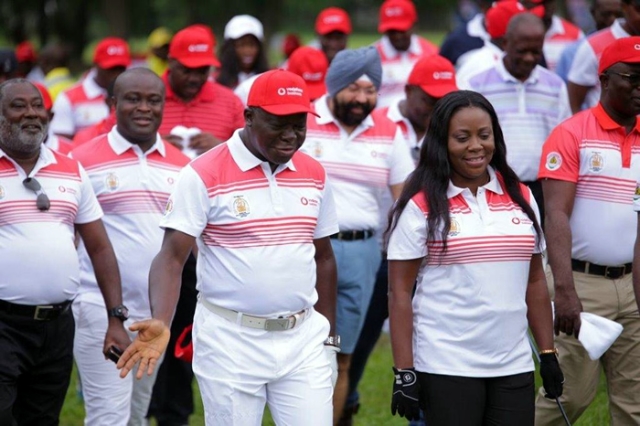 There’s always something special about the official tee-off that characterises the Asantehene Golf Open Championship in Kumasi.

Apart from being the most anticipated ceremony during the golf event, it is also the most heavily patronised.

Typically most events kick-off with the official opening before the key competitions begin.

Not the Vodafone Asantehene Golf Championship; it takes a different turn.

The tee-off will usually begin two days after the commencement of the championship, and it normally occurs early in the morning before 7 am. The King’s outfit will always insist that it is done early for the king to get back to the palace in time for other matters of state importance.

In the last three years since Vodafone came aboard as title sponsor, the Asantehene has never failed to impress with his strict adherence to time and his displays on the course.

A year ago, but for a timely intervention, the writer of this article would have been thoroughly embarrassed and maybe, reprimanded for turning up late.

This year was no different. By 6.30am on Friday, May 10, the sirens and fleet of vehicles that usually accompany the Asantehene were already at the Kumasi Royal Golf Club.

Professor Baiden and Chairman Atta-Antwi hurriedly made their way to the entrance to meet the King. He was then led to the golf course in the company of Vodafone’s new Chief Executive, Patricia Obo-Nai and External Affairs Director, Gayheart Mensah, to begin the ceremony.

First was the hoisting of flags to herald the opening of the event; after which came a rare cake-cutting ceremony in commemoration of the King’s birthday. Then the hostilities began. Usually, the King will play a brief round of golf with the Vodafone CEO to highlight the partnership. Over the last two years, former Vodafone CEO, Yolanda Cuba was an ever-present playing partner.

This time around, new CEO Patricia Obo-Nai was the centre of attention and she was eager to go at full throttle.

It was an unbelievable spectacle to behold as the two slugged it out to the delight and admiration of the mammoth crowd. Otumfuo asserted his authority early on; hitting the ball with his characteristic poise and style. His hits were well-timed and perfectly in tune with the golf club. Patricia, a newcomer to golf, started slowly; however, as the game wore on, she got into her groove and started hitting with aplomb and to loud applause from the onlooking crowd.

To Patricia’s credit, she displayed no hesitation; there were no jitters; she appeared in control and that might have accounted for her sterling display eventually.

The crowd that accompanied the two as they played alongside Royal Golf Club Chairman, Atta Antwi, included Sports Minister Isaac Asiamah, Prof. Baiden from the Royal Golf club, Senior Executives from the sponsoring companies including Vodafone, CAL Bank, Stella Artois, SIC and a section of the golfers participating in the championship.

Once again, Vodafone has staged a championship fit for a king; one that he truly delights in. On the other hand, it also presented the perfect platform for new CEO Patricia Obo-Nai to endear herself to the external public and what a way to report for duty.