We are going to do our best against WAC – Emmanuel Nettey - MyJoyOnline.com

We are going to do our best against WAC – Emmanuel Nettey 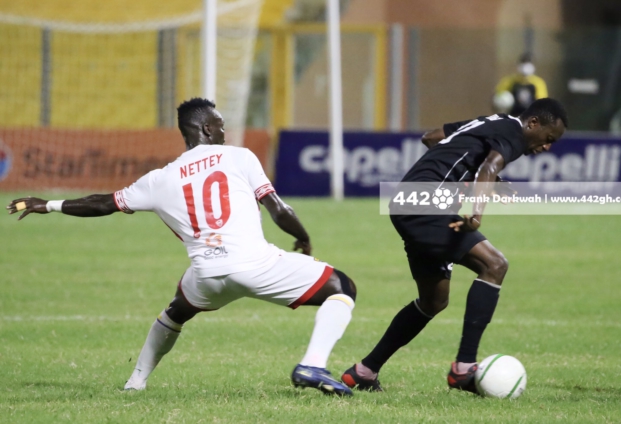 After beating Guinea’s CI Kamsar, Hearts of Oak will lock horns with Wydad AC at the Accra Sports Stadium.

Victory in Accra will present Hearts with the chance of bringing an end to their 11-year absence from the group stages of the CAF Champions League, before traveling to Morocco next week.

Hearts of Oak have been in good form both on and off the pitch, stretching from their title win to their victory over Kamsar.

Awards won by Samuel Boadu and Salifu Ibrahim coupled with a club dinner and wedding of head coach, Samuel Boadu has raised the spirits of the Phobians.

Speaking to Joy Sports ahead of the encounter, Hearts midfielder, Emmanuel Tetteh acknowledged challenge in facing off with Wydad, but believes Hearts are well prepared to scale the difficulties.

“So far I think it’s been good. Our first game against Kamsar we were able to overcome them by winning 2-0 and we’re progressing. Now we have a much tougher opposition in WAC but I think it’s not too much of a hurdle to cross. We are going to do our best considering the training sessions we’ve had with our technical team. I think everything is going the right way for us Sunday. We’re going to deliver,” Tetteh said to Joy Sports.

A single-leg home tie, instead of the regular home-and-away, meant Hearts of Oak had it relatively easy versus Kamsar on their return to continental club football.

This time however things could prove more difficult when Hearts make the trip to Morocco for the second leg of the encounter. A Hearts win in Accra, will give them more confidence ahead of October 24.