We’re neither against mining nor Newmont, we’re against anyone who takes what is rightfully ours – Ahafo residents 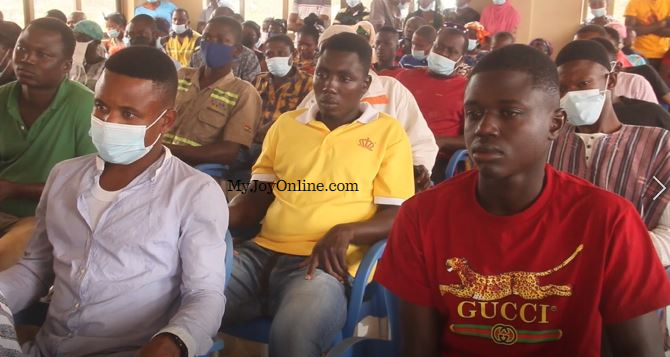 Residents of five affected mining communities in the Ahafo region are agitating against what they allege as unfair treatment by Newmont Ghana.

The locals are unhappy at the total rejection of their inputs into a new agreement with the multinational gold mining company, except for 100% employment opportunities for unskilled residents.

The coalition of affected communities is also upset that the 8-year mandate of the moderator and co-moderator of Ahafo Social Responsibility Forum (ASRF) expired in 2018, but they remain in office.

“In 2018, which was the 4th year and the period for another review, Newmont and Forum requested the opinions, inputs, and comments about what should be modified, abolished, or brought up in the New Agreements.

“All the major stakeholders including the youth, the SDCs, Nananom, NADeF, and the entire stakeholders presented their views and inputs for consideration,” they said.

According to the residents of Kenyasi No1, Kenyasi No 2, Ntotroso, Gyedu, and Wamahinso communities, the agreements reached have been shelved.

They claim the moderator’s actions seek to favour Newmont, which has already affected portions of agreements that share the Newmont Ahafo Development Fund (NADeF) to all the ten communities in the area.

“They mostly do this at the blind side of the community leaders,” claims Secretary of the affected communities, Abdul-Karim Yeboah.

The coalition also demands Newmont Ghana Limited validate their employees annually to know how many residents have been employed.

“We, therefore, insist that revalidation should be yearly contrary to the five years that Newmont is insisting on. It will give us the opportunity to know the genuine community citizens the company employs each year and also interact with our own people working in the mine, especially those who have been staying away from town and are unable to come home due to work schedules” Mr Yeboah said.

Revalidation is when a community reaffirms its members who are working with Newmont or its contractors.

Percentages in Newmont’s fund contribution were part of the petition sent to the company.

According to the coalition, the contribution quota to NADeF is one dollar per ounce of gold produced and one per cent of pre-tax profit since 2008.

Since gold price is more than double, they want the contributions to increase to at least 3% per ounce of gold and pretax income.

“Some companies give 1.5% and more to their mining communities. This will help boost community development and sustainability.

“The population of the mining communities has increased, the price of gold has increased from 2008 to about 250%, but the company still offers $1 per ounce of gold produce,” said Mr Yeboah.

They also want the standing committees abolished, and full strength is given to the forum where all members, including Chiefs, make decisions.

Mr Yeboah noted that several petitions to Newmont management have not yielded any positive yields.

Efforts by JoyNews for Newmont to respond to the concerns of the communities have not been fruitful.

The coalition, therefore, wants the intervention of the government and the Asantehene to address their concerns.