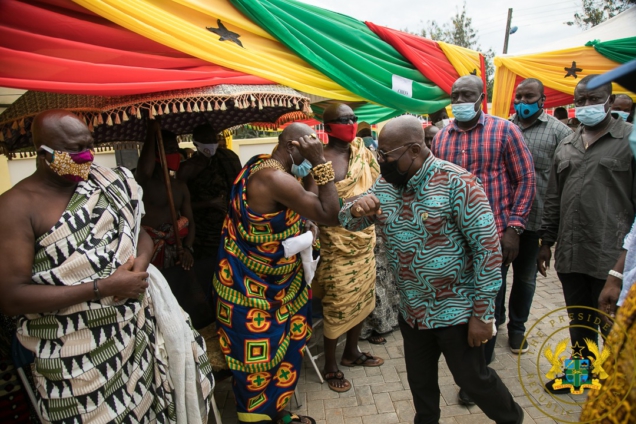 Chiefs in the Ahafo Region have declared their unflinching support for the President Nana Akufo-Addo, in his bid to secure a second term in office.

Chiefs from Duayaw Nkwanta, Techimantia, Bechem and Kenyasi made this known on Saturday at separate durbars they held in honour of the President when he visited their towns on day one of his two-day tour of the Ahafo Region.

At Duayaw Nkwanta, the Paramount Chief of the Duayaw Nkwanta Traditional Council, Nana Boakye Tromo III, told the President, “you have distributed the national cake equitably, and we, in Duayaw Nkwanta, have gotten our fair share of development.”

Citing several examples of projects undertaken in Duayaw Nkwanta, together with policies such as Free SHS, 1-District-1-Factory, and the programme for Planting for Food and Jobs, Nana Boakye Tromo III stated that “this clearly shows that you have been chosen by God to lead us.”

Techimantia
At Techimantia, after President Akufo-Addo cut the sod for the construction of the 40.1km Bechem-Techimantia-Akomadan road, the Krontihene, Nana Ampong Koromantan, prayed to God for long life, good health and strength for the President.

“Today, we just want to tell you that we, in Techimantia, will never forget you for the construction of the Bechem-Techimantia-Akomadan road. Indeed, the presence of a lot of the townsfolk at this durbar testifies to the fact that we have already accepted you as one of us. It is four more for you,” he added.

Bechem
Commissioning a Business Resource Centre for the Tano South District, Bechemanhene, Nana Fosu Gyeabuor II, expressed the gratitude of the Chiefs and people of Bechem for the Centre constructed by the President and his Government.

“Very soon, we shall go to the polls, and if you look at this beautiful building, residents of Bechem do not need to be told about what has to be done. It is up to them. They know what to do,” he said.

Touching on the sod-cutting ceremony performed by the President for the construction Bechem-Techimantia-Akomadan road, he added that “I know you will do it because you fulfil your promises.”

Kenyasi
At Kenyasi, where the President commissioned a 68-bed ward, doctor’s accommodation and children’s ward at Kenyasi Government Hospital, Nana Kofi Abiri, Omanhene of Kenyasi No.1, recounted how, at during the last visit by the President to his town, he appealed for the construction of several amenities for the community.

“We pleaded with him to construct our road for us, and we also needed a TVET institute. He didn’t ignore our requests as we can see machines constructing the road. We also said that we needed mobile phone network at Wamahiniso, you have done it for us, we are grateful,” he said

The Kenyasi No.1 Chief added that “Nana, since assuming office, you have helped in our development, many of the youth are employed, when you look at the Free SHS you implemented, it has helped the poor. Ghanaians thank you.

When we look at NABCO, all those who have completed universities have been employed, Nana, Ghanaians thank you.

The One Constituency One Ambulance has also come to help in health delivery. Nana, in all these, you never left Asutifi out, we have our fair share, we thank you very much.”