Burna Boy takes Grammy plaque to club; drinks out of it 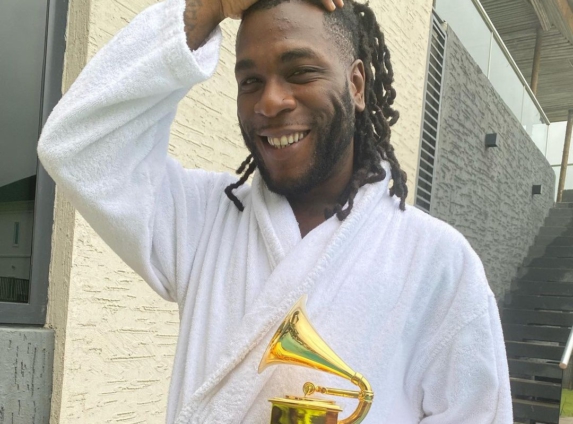 Nigerian artiste Burna Boy is once again celebrating his Grammy Award win for Best Global Music Album, which he won with his critically acclaimed 2020 LP ‘Twice As Tall’.

The artiste, during the weekend, was spotted at a club with his Grammy plaque he finally received just days before.

In a viral video on social media, the artiste was seen surrounded by friends with one holding a champagne bottle.

He proceeded to pour the champagne into the gramophone and handed it over to Burna Boy. The ‘Ye’ hitmaker then drank from his ‘cup’ earning himself a round of cheers and shouts from fans present.

A post shared by The Tattle Room 🇳🇬 🌎 (@thetattleroomng)

Burna Boy is not the only artiste to have drunk from his Grammy Award plaque.

In 2013, Jay-Z took a celebratory shot of his own D’usse Cognac from his Grammy award after taking home three trophies that night.

The first-born child of Beyoncé and Jay-Z, in March 2021, added to her list of accolades by winning her first Grammy Award for Best Music Video for “Brown Skin Girl“.

The nine-year-old is credited as a featured artist, making her the second-youngest person to win a Grammy.

Blue Ivy toasted to her win by drinking out of her gold-plated Grammy trophy with a blue-and-white-striped straw and wearing a matching gold crown.

DISCLAIMER: The Views, Comments, Opinions, Contributions and Statements made by Readers and Contributors on this platform do not necessarily represent the views or policy of Multimedia Group Limited.
Tags:
Burna Boy
Grammy Awards
Twice as Tall