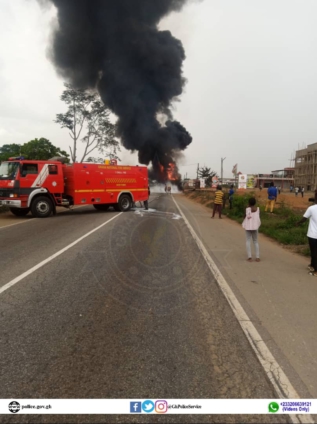 A loaded fuel tanker has caught fire on the Accra-Kumasi Highway (N6) at Nsutam near Paradise Rest Stop.

To avert casualties, the Kyebi Motor Traffic and Transport Department (MTTD) has blocked the highway from the Osino direction and at Nsutam Custom Barrier.

Currently, the Accident Prevention Squad (APS) traffic and officers of the Ghana National Fire Service (GNFS) are at the scene working to douse the fire.

No casualties have been reported by the Police in the update on its Facebook page.

Meanwhile, the Police have entreated all approaching motorists from Accra and Kumasi to be patient and adhere to traffic directions from the officers at the scene.

According to the Police, further updates will be communicated “in due course.”