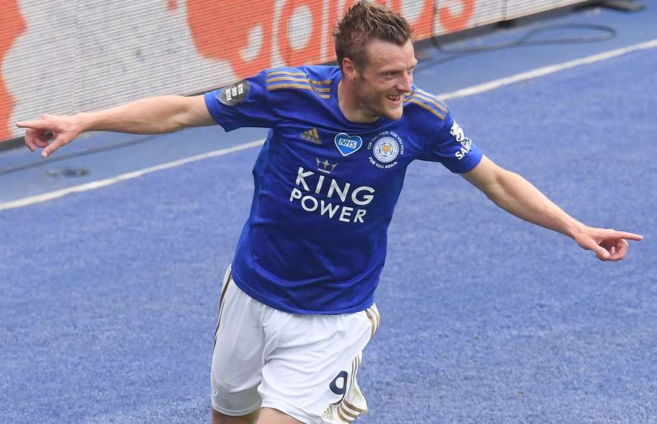 Jamie Vardy has become the latest member of the Premier League 100-goal club and the first Leicester player to achieve that feat.

Only three other players in the Foxes’ history have recorded a century of top-flight goals for the club.

Vardy now forms part of an illustrious group of stars, with the 33-year-old having been a model of consistency for Leicester.

Ahead of Leicester's key match against Arsenal tonight, here's to Jamie @vardy7, whose story from obscurity to the Premier League 100 goals club is nothing short of inspiring. 🦊 #foxesleicester #leicestercity #EPL #englishpremierleague #jamievardy

His meteoric rise to prominence is well-documented, with a stunning surge made from the non-league ranks to a Premier League stage.

The Foxes snapped him up from Fleetwood in 2011, with a jump made from the Conference into the Championship.

Vardy helped to secure promotion into the big time, before going on to play a leading role in a remarkable title triumph in 2015-16.

He hit 24 league goals that season and was named Premier League Player of the Year.

The 20-goal mark has been reached again in the current campaign, with a landmark effort recorded in a meeting with Crystal Palace.

Vardy did not make his debut on a Premier League stage until the age of 27, with Arsenal icon Ian Wright the only centurion to have been older when making his bow.

Leicester will continue to look to Vardy for inspiration having worked hard to keep him on their books, with interest from afar having been shown at regular intervals.

His first Premier League goal for them was recorded against Manchester United in a 5-3 defeat to the Red Devils in September 2014.

He managed only five efforts all season in that campaign, but quickly got to grips with life among the elite.

Brendan Rodgers’ side have suffered a slip wobble as a collective since football returned amid the coronavirus pandemic, with questions being asked of their ability to secure Champions League qualification.

They are, however, very much in the mix for a top four finish and will need Vardy to continue leading by example when it comes to end product in the final third.