Hearts of Oak lift league trophy at Sogakope despite defeat 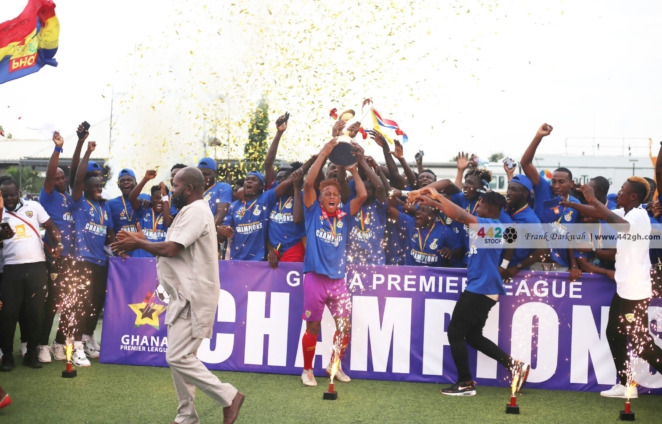 Hearts of Oak’s poor record at WAFA continued as the champions suffered a 1-0 defeat courtesy a free kick from Atte Youssifou.

Hearts had failed to win in Sogakope in their last four tries with the standout result being a 5-0 loss in 2017.

The mood was different this time as the Phobians arrived at Sogakope to massive celebrations and received a guard of honor from the WAFA players.

WAFA then went ahead to honor the champions by presenting them flowers ahead of kick-off.

Hearts of Oak came close through in-form Daniel Barnieh but he missed his chance.

Youssifou stepped up halfway through the second half to bury a direct free kick to give WAFA the lead.

The Sogakope-based club defended well and held on to their lead to end the season on a high.

He said: “We have to respect our last three opponents. We will try to get all the nine points.”

Boadu will be the first to admit that his side’s level of performance and intensity has reduced in recent times.

The Phobians dropped seven points in their last three games and will be thankful to Kotoko, whose form was similarly poor.

Hearts of Oak needed just two wins from their last three games but they ended up with none, drawing two and losing one.

Perhaps, one might make the case of levels dropping after securing their 21st league title.

However, Boadu is a perfectionist who will be trying to figure out why his team dropped so many points in their last three games.

Especially with next season’s CAF Champions League in mind.

Despite all their early season struggles, WAFA have steadily improved throughout the season.

At a point, the Academy Boys were hovering just above the relegation zone.

The board kept faith in head coach Prosper Narteh Ogum and they have been repaid.

WAFA finishing third ahead of Aduana Stars and Medeama, and take home GHC 80,000 plus 40 bronze medals.

DISCLAIMER: The Views, Comments, Opinions, Contributions and Statements made by Readers and Contributors on this platform do not necessarily represent the views or policy of Multimedia Group Limited.
Tags:
Ghana Premier League
Hearts of Oak
WAFA