Law students to demonstrate on Oct. 20 over entrance exams fiasco 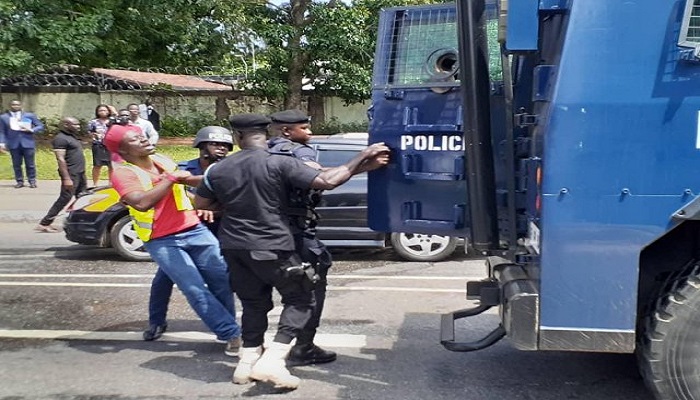 The law students were arrested by police and dispersed with rubber bullets on their last protest.

The National Association of Law Students (NALS) says it will demonstrate on Wednesday, October 20, over the Ghana School of Law entrance exams failures.

Some aggrieved candidates have been agitating and accusing the General Legal Council (GLC) of their inability to gain admission following a new quota system.

However, the affected students claim this new rule was unknown to them before they took the exams.

In a notice served to the Greater Accra Regional Police Commander on October 11, 2021, the leadership of the Association resolved to hit the streets to demand reforms in the nation’s legal education.

“Some 2,000 law students, graduates and associates are estimated or expected to attend as demonstrators, and the closing time of the demonstration will be 2 pm or so soon thereafter as the demonstrators may be addressed by the President, or the Vice President or a bona fide Cabinet Minister other than the Attorney-General and Minister of Justice, upon receipt of the petition,” the statement said.

The Association had earlier claimed that 1,289 out of the 2,824 students who sat for the exams met the 50% pass mark yet, were excluded from the successful candidates.

“There was a clear, very inexcusable exclusion of some 499 candidates, constituting 39% of candidates who obtained this 50% and 18% of all the candidates,” NALS alleged in a statement dated October 5, 2021.

This notwithstanding, “NALS is saddened and notes that this published 2021 success rate would have been poorer, not because students underperformed, but because the original intention was to admit only 550 students predetermined irrespective of the actual performance.”

Meanwhile, there have been calls for the General Legal Council to submit raw scores of students who partook in the 2020 and 2021 entrance exams to Parliament for further investigation.

The National Union of Ghana Students (NUGS) has since called on the Office of the Speaker of Parliament to intervene in the existing controversy and bring finality to the matter.

In a petition dated October 12, 2021, the Union also charged the Speaker of Parliament to order the General Legal Council to appear before the Constitutional, Legal and Parliamentary Affairs Committee with the raw scores obtained by candidates in last year and this year’s entrance exams respectively.

According to the Union, there seem to be a deliberate attempt to shut the door of legal education to some students regardless of the grades they obtained.

The Ghana School of Law

The Ghana School of Law remains the monopoly in terms of professional legal training in Ghana.

After securing an LLB from an accredited University, students who wish to practice law in Ghana must proceed to the school of Law.

The school has limited space, with campuses in Makola, Greenhill and Kumasi.

There have been calls for this monopoly to be broken, with some calling on the faculties themselves to administer the professional training for students.

Those against these proposals, including former Chief Justice, Sophia Akuffo, have argued this will open the floodgates and lead to substandard lawyers’ training.