My debut in Kumasi was a great feeling; I’m elated to join Hearts – Samuel Inkoom 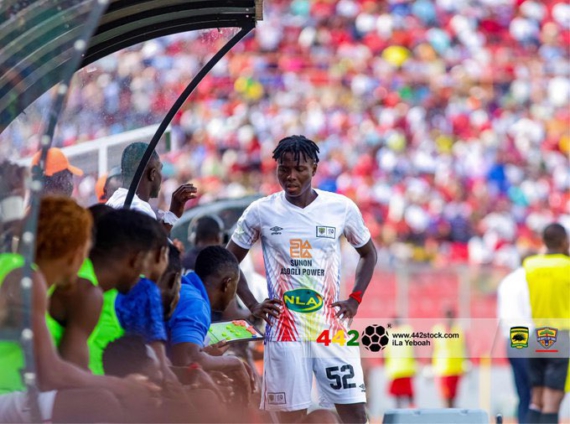 In a tweet on April 12, Samuel Inkoom stated that joining the Phobians has brought him so much joy.

He became the second high profile player to join the club this season after Sulley Muntari was announced in February.

According to Inkoom, it “was a great feeling” playing with the rainbow club for the very first time.

The former Ghana U-20 defender made his debut on Sunday, April 10, in a super clash against his former GPL club, Krobea Asante Kotoko, at the Baba Yara Sports Stadium in Kumasi.

Inkoom came off the bench and played the last 27 minutes of the game. The right-back showed glimpses of his quality, but that was not enough as Hearts lost to their fierce rivals with a 1-0 scoreline.

Franck Mbella Etouga scored the game’s only goal after Kotoko were awarded a controversial penalty for a foul on Fabio Gama.

“The results weren’t what we were expecting,” Incoom said in reaction. However, assured of a victory in subsequent matches, stating that “we live to fight another day.”

Meanwhile, Samuel Inkoom has called on all and sundry to support the Ghana Premier League and make it a better one.

On the other hand, the defending Ghana Premier League champions has filed a protest against referee Joseph Kenny Paddy following their defeat to Asante Kotoko in the Super Clash on Sunday.

The club expressed their dissatisfaction with the performance of the centre referee and has now made an official complaint to the Ghana Football Association.

In a letter signed by the club’s head of communications, a statement read: “The management of Accra Hearts of Oak has officially filed a protest against referee Kenney Padi for his unprofessional conduct during our match-day 24 encounter with Asante Kotoko at the Baba Yara Stadium on Sunday, April 10, 2022.