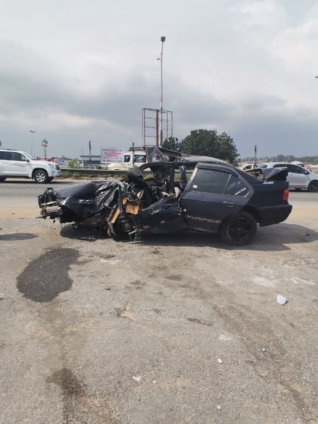 The campaign, which is aimed at curbing the increasing cases of road accidents in the country, is being supported by Vital Strategies and the Bloomberg Philanthropies Initiative for Global Road Safety (BIGRS).

The campaign titled “Surgeon” is expected to run for six weeks on TV, radio, social media and out-of-home media outlets and focus on the enforcement of the speeding regulations to motivate drivers to adhere to speed limits and save lives.

According to a press statement issued after the launch of the campaign, the Minister for Transport, Kweku Ofori Asiamah stressed on the need for all road users to be committed to ensuring a crash-free Christmas and called on all transport operators and unions to implement the basic operational standards and guard against reckless driving behaviour during the festive season.

“I urge all road users and duty bearers to keep up the good work throughout the festive period and beyond. There is a responsibility for all of us to be committed to ensuring a crash-free Christmas. I call on transport operators and unions to also demonstrate commitment to saving lives by implementing basic operational standards. I further urge transport operators to guard against reckless driving behaviour during this season, be each other’s keepers and promote a strong road safety culture,.” he said.

The statement further expressed the NRSA’s commitment to enact data-driven actions to save lives adding that the campaign, coordinated with enforcement efforts, was one of the strategies that will be used to address speeding and urged all drivers to adhere to the posted speed limit signs.

“While we have seen some progress in the reduction of road deaths, much more still needs to be done. We urge all drivers to follow posted speed limits to put an end to these senseless tragedies,” the statement said.

The statement further noted that the quest to reduce deaths on Ghana’s roads calls for concerted efforts among stakeholders, stressing that “a mass media campaign, along with strong police enforcement is needed to reduce speeding which is a risky behaviour.”

It revealed that during the campaign period, the police would be on the streets enforcing speed limits and penalizing violators in accordance with the road traffic regulations.

“The Surgeon” campaign was developed based on national and local data and rigorous research into what messages resonate with those who tend to exceed speed limits in Ghana.

DISCLAIMER: The Views, Comments, Opinions, Contributions and Statements made by Readers and Contributors on this platform do not necessarily represent the views or policy of Multimedia Group Limited.
Tags:
Accidents
National Road Safety Authority
road safety