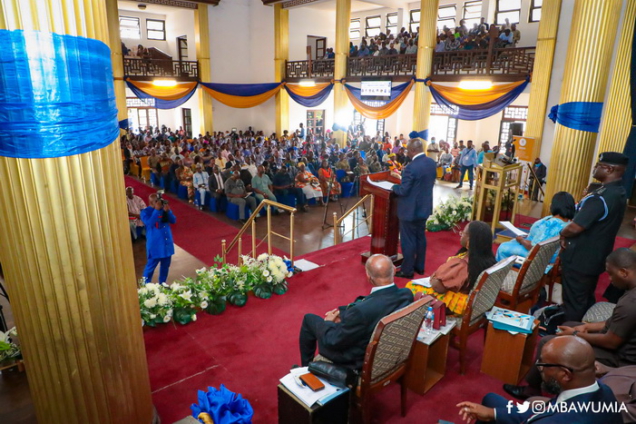 The Vice President, Dr. Mahamudu Bawumia, on Tuesday opened the 74th edition of the annual New Year School and Conference by the University of Ghana in Accra.

The New Year School and Conference, which brings together stakeholders from academia, business and political leadership to discuss issues of national significance, has been held annually since the inception of the University of Ghana 75 years ago.

Opening the 74th edition, Vice President Bawumia, who represented President Nana Akufo-Addo, commended the University of Ghana for sustaining the New Year School, which he said, “has always been a source of national discourse and for transforming our nation.”

The theme for the 74th New Year School is: “Positioning the African Market for Sustainable Economic Development through AfCFTA (African Continental Free Trade Area), and Dr. Bawumia noted that the theme provides an important barometer for Ghana’s quest to boost economic development through regional trading.

“While recent domestic and global economic challenges have negatively impacted our economy, it is important that we promote AfCFTA efforts of key stakeholders such as industry, the private sector, academia and government to reposition Ghana through trade,” Dr. Bawumia noted.

The Vice President expressed concerns over the low level of trade between African countries, adding that Africa must take advantage of the opportunities AfCFTA offers to avert the worrying situation of low intra Africa trade.

“Madam Chairperson, when you consider the fact that trade between African countries remains low, currently standing at some 16% of our combined GDP, compared to other parts of the world, like the European Union’s 75%, it is obvious that these very low levels of intra-regional trade cannot improve our prospects of bringing prosperity to our peoples ” Dr. Bawumia observed and listed a number of opportunities the AfCFTA provides.

“A large part of the growth and prosperity that we seek on the continent will come from us trading more among ourselves.

The coming into force of the AfCFTA means that Africa now has the world’s largest free trade area since the formation of the World Trade Organisation,” he said.

“The Free Trade Area will cover a market of 1.2 billion people, with a combined GDP of $3 trillion, across the fifty-four (54) Member States of the African Union that have signed up to the Agreement. It will provide the vehicle for us to trade among ourselves in a more modern and sophisticated manner; it will offer a huge opportunity to exploit the abundant wealth and resources of our great continent for the benefit of all our people; and it would give us protection in how to deal with other trading blocks.”

Dr. Bawumia added that the coming into force and successful implementation of the AfCFTA ties in perfectly with the vision of moving Ghana to a self-reliant country, “that has freed herself from a mindset of dependence, charity and handouts, and is determined to make intelligent, disciplined use of her considerable resources the basis for her growth and prosperity. “

“This vision can be better realised if we can leverage the trade and investment opportunities the AfCFTA presents.”

Dr. Bawumia further observed that, Ghana, like many African countries, is blessed with an abundance of resources, but, has, over the years, not been able to translate this into the much-needed growth and development the country and continent desire, thus leaving the economy in a fragile and unfulfilled state.

To avert this and also to realise the full benefits of AfCFTA, Dr. Bawumia called for the transformation of the economic architecture, in order to meet the demands of the emerging global economies post covid-19 and the Russia-Ukraine war.

“In order to maximise the benefits of the AfCFTA the structural transformation of the economy has to be accelerated,” Dr. Bawumia urged.

“We are still overly reliant on the production and export of raw materials, and not sufficiently on the things we make and grow.”

“That is why Government is firmly committed to addressing productive capacity issues through initiatives such as the “One-District One Factory” (1D1F) policy, the development industries like the integrated bauxite and aluminum industry, the iron and steel industry and the programme for agricultural renewal and enhancement that we have dubbed “Planting for Food and Jobs”.

“It is this transformation that will give us the best opportunity to derive maximum benefit from our abundant natural resources, and from our participation in the AfCFTA, and help bring progress and prosperity to our people, fortified by the deliberate steps we are taking to educate our children to be  responsive to the needs of the 21st century world of work.” Dr. Bawumia also cited Government’s digitalisation initiative, which has catapulted Ghana to one of the leading digital economies in Africa, as an example of how the government is transforming the economic architecture of the Ghanaian economy ahead of the impending global economic revolution.

DISCLAIMER: The Views, Comments, Opinions, Contributions and Statements made by Readers and Contributors on this platform do not necessarily represent the views or policy of Multimedia Group Limited.
Tags:
Dr Mahamudu Bawumia
New Year School
University of Ghana