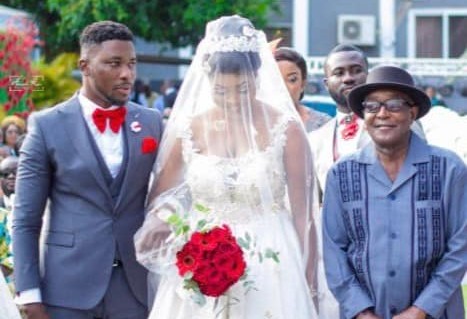 Her husband, musician turned political activist, A Plus, announced the news on Facebook.

He revealed that the 85-year-old died peacefully on Monday, April 18, in his sleep at his residence.

The final funeral rites of the late Edward Quaye would be done in line with Islamic teachings because he was a Muslim.

A Puls shared pictures of his late father in law, one from their wedding where he stood next to his daughter, giving out her hand in marriage.

“Lost my father-in-law… 😭 but as a Muslim, ☪️ the best you can wish for is to live a long life in good health and die peacefully in your sleep during Ramadan. May Allah give you an easy and pleasant journey and shower blessings on their grave 🙏🏾This life… 😔,” he wrote.

Meanwhile, Akosua Vee is reportedly out of the country and cannot make it to her father’s final funeral rites.

Taking to her Instagram stories, she bemoaned her inability to be present and pay her last respects to her father before his burial.

“Islamic religion has done me bad. I won’t get to see my dad and pay my last respect to him. I love you my champ. Till we meet again,” Akosua Vee wrote.

DISCLAIMER: The Views, Comments, Opinions, Contributions and Statements made by Readers and Contributors on this platform do not necessarily represent the views or policy of Multimedia Group Limited.
Tags:
A Plus
Akosua Vee