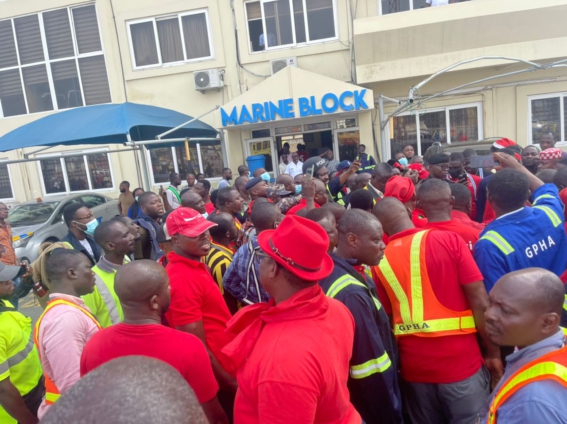 Aggrieved Workers of the Ghana Ports and Harbours Authority (GPHA) have called off their demonstration demanding for 20% control of containers at the ports for 10 years.

According to the workers, they agreed to call off the demonstration after management of GPHA and Meridian Ports Services (MPS) reached an agreement for GPHA to collect 20% of containers for two years after which the remaining years will commence.

By this, the agreement is expected to kick off on August 1st, 2022 at the Ports.

Speaking to Joy Business, the GPHA Union Chairman, Emmanuel Arhin Young, said the union will closely follow modalities for the implementation of the 20% revenue receivables by August, 2022.

“We will make sure the modalities are closely observed. For now, we accept the two years, but I must stress that that is just for now. We will soon start for the extension” he said.

Mr. Young said Cabinet has directed MPS to cede 20% of the revenue at the ports to the GPHA, but the former has refused.

He maintained that the union will this time ensure that that the MPS obeys the directive from cabinet.

He argued that the MPS-GPHA deal is having dire consequences on the GPHA workforce and the entire nation.