CAFCC: Hearts of Oak bow out of Africa despite beating AS Bamako in Accra 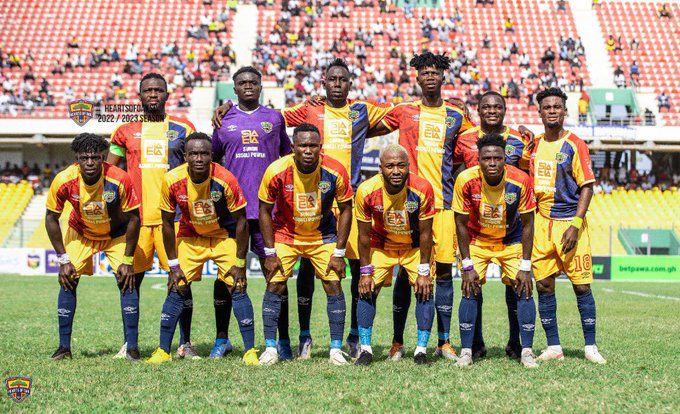 Accra Hearts of Oak have been knocked out of the CAF Confederation Cup qualifiers despite a slim 1-0 victory over Mali’s AS Real Bamako.

The Phobians needed to overturn a 3-0 deficit from the first leg but it wasn’t until the 89th minute when they finally scored the first goal, an acrobatic effort from Caleb Amankwah at the far post.

But it was too little too late and the Ghana FA Cup winners exit the competition at the same stage they did last season.

The heavy defeat a week ago made overturning the result a daunting  task for David Ocloo’s men and the first half proved as much.

The Phobians struggled to break down the AS Bamako defense, and it took until the 45th minute for the Phobians to get their first shot on target, a feeble header from center back Konadu Yiadom calmly collected by Bamako’s keeper.

At the start of the second half, Ocloo made changes, both in personnel and tactics, bringing on Obeng Junior, Ibrahim Salifu, Mohamed Alhassan, and switching to a back 3 and committing more men forward.

But the Bamako remained resolute at the back for the majority of the second half, with help from their keeper, who made a brilliant save off Junior before center back Camara’s acrobatic goal line clearance kept the score even.

But Hearts eventually found the opening goal through Amankwah, who connected on the volley following a corner kick to give Hearts a deserved lead.

There were 5 minutes of added time to score two goals and force a penalty shootout, but it was asking for a miracle, but it did not arrive  and Hearts of Oak bow out in front of their own fans.

DISCLAIMER: The Views, Comments, Opinions, Contributions and Statements made by Readers and Contributors on this platform do not necessarily represent the views or policy of Multimedia Group Limited.
Tags:
Hearts of Oak