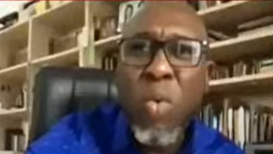 Senior Vice President of Imani Africa says the three-member committee established by the Interior Ministry to probe the killings that occurred in Ejura on June 29, is not on the right path when it comes to the investigation.

Mr. Kofi Bentil, speaking on JoyNews’ Newfile, explained that the Committee chaired by George Kingsley Koomson, Justice of the Court of Appeal, seemed more interested in matter not relevant to the killings.

According to him, the actions of the Committee portrays the idea that there is a pre-set agenda that the committee is keenly trying to establish.

“We make a mess when we ignore the very obvious issues and try very hard to create a different set of facts and I think that is what is happening here. We have a situation here where in the face of clear evidence, we are being invited to split heads about esoteric ideas, some of which have little probability.

“Why are we not interested in the things we can deal with right now. We are interested in things like motive for murder, we are looking at whether the guy is a member of this or that and whether that contributed to his murder. In Ghana, when somebody is murdered, you don’t need to do motive. It is taught in law school so in this particular jurisdiction, anybody or committee who is looking for a motive is totally off and somebody on that committee knows it, they should tell them that it doesn’t matter what the motive is.

“What I can see clearly is that the Committee looks like they are searching for a narrative to support a preset story and nobody is buying it,” he said on Saturday, July 10.

In light of this, Mr Bentil, in his interaction with host, Samson Lardy Anyenini, concluded that the Committee is lost in the woods.

“Somebody is inviting us to go and look for some very weird situations, that is totally taken away from any respect we have from the Committee and frankly, I’m not sure about the legal remit of the Committee and what they are capable of doing,” he added.

The Imani Africa Senior Vice President also raised concerns over worrying facts that the Committee glossed over since it commenced on Tuesday, July 6.

One of the many situations he cited included, the burial of two victims, Abdul Nasir Yussif and Muntala Mohammed, with bullets in their remains. According to him, any competent doctor in the space of a maximum of few hours can take out a bullet.

“But for some wild reasons, we are being told of a story of pressure that led to the person being buried with the bullet which is a critical piece of evidence in resolving this, we have left it. We have managed to bury the guy. If we are a serious country, that grave will be guarded and that body will be exhumed,” he added.

Media consultant and host of ‘Good Morning Ghana’, Randy Abbey, who was also on the show, encouraged the three-member Committee to tread cautiously with the kind of questions posed to witnesses assisting investigations.

“I am a bit disturbed about the line of questioning and commentary from the members of the Commission, and I think they have to check it. I should think that by now, they should be watching a playback of the sessions to ask themselves whether they are not even getting too carried away and all that,” he said.

On the issue of deploying the military to Ejura-Sekyedumase, Mr Bentil also subscribed to the assertion that the Ashanti Regional Police Command had the capacity to ensure the potential rampage it had received intel on did not materialise.

The presence of the military in such a matter to him was not necessary or needed.