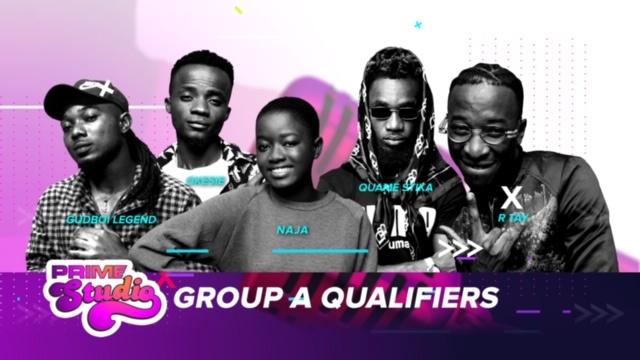 After weeks of back to back performances, judges of Joy Prime’s new music reality show, Prime Studio have selected its first set of finalists.

The finalists Naja, Gudboi Legend, Okesie, R Tay and Quame Sicker impressed the judges with their versatility while performing live studio renditions of some popular songs.

These contestants along with five others, Deblin Vibe, Amin Ola, Topmost, Young Tuga and Nicole, were the first team to show the judges what they can achieve when given a chance to show their creativity.

Unfortunately, the latter five did not have enough points to push them through to the next stage of the competition.

Prime Studio is a reality TV show that focuses on unearthing talents in music.

The show began with 20 contestants who have had to battle each other to win one of the 10 final slots.

Producers had separated the contestants into two groups with ten members each.

Naja, Gudboi, Legend, Okesie and Quame Sicker are the finalists from Group A.

The judges are gearing up for amazing talent display for the next 10 contestants, in group B.

Who will join Naja, Gudboi, Legend, Okesie and Quame Sicker to next stage?

Watch Prime Studio live on Joy Prime this and every Saturday at 8 pm prompt to follow keenly whose journey will end and who will make it to the next stage.