GPL: The 8 unbeaten teams at home after matchday 12 - MyJoyOnline.com

GPL: The 8 unbeaten teams at home after matchday 12 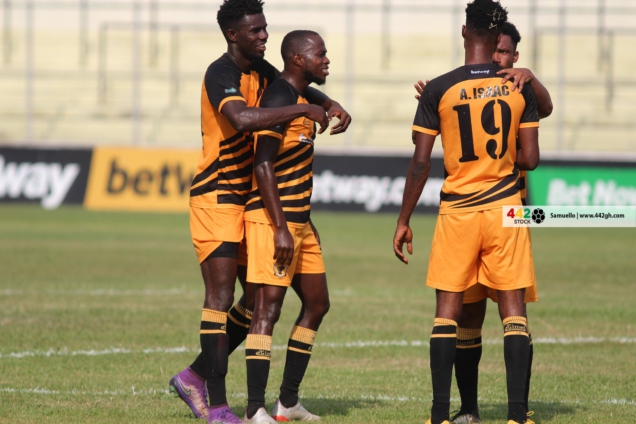 A quick look at the Ghana Premier League statistics reveal how imbalanced the win column has been after 12 matchdays.

In 108 matches played, 69 have ended in victories with 39 leading to draws.

Breaking the number of wins down, 55 have been attributed to home victories and just 14 have been earned by away teams.

Eight clubs have demonstrated superiority on their own turf remaining invisible so far.

Here’s a breakdown of how each of these teams have preserved their unbeaten status at home.

Karela United have turned their fortunes around to become one of the contenders for the league title.

In the previous season, the Ayinase-based side were one spot above bottom placed King Faisal. Luckily, the league’s truncation kept them afloat.

Their resurgence has been fuelled to a new sponsor and stadium but their form at the Crosby Awuah Memorial Park cannot be ignored.

Karela are the only team with a 100% record at home, winning all six games so far this season. With just three goals conceded, Evans Adotey’s men have conceded the joint second lowest goals at home (3).

Diawisie Taylor has been their main man. The striker has netted six of his side’s 14 home goals so far.

If you are looking for a side that scores a lot of goals at home, end that search because WAFA is your team.

In fact, they are known for destroying fellow top flight sides at least once each season at the Red Bull Arena.

This season, WAFA have scored the highest number of goals at home (18) whilst recording four wins and two draws.

Daniel Lomotey, who recently departed to Algerian side ES Setif, was instrumental at home for WAFA. He netted all eight of his Ghana Premier League goal tally at Sogakope.

Bechem United have not lit up the league with their goals at home but they have impressed with their defensive record.

Kwaku Danso’s side have won four of six home games this campaign, drawing the other two. They have also netted nine goals at the Nana Gyeabour’s Park so far.

It is also interesting to note that they have scored three or more goals just once on their turf this season.

Bechem’s goals have been more spread out unlike the previous two teams. Three Bechem players have scored two goals each at home so far this season and the remainder have been scored by others.

AshantiGold have scored a huge number of goals this campaign. It is no surprise that they have netted the highest number among Premier League teams this season (21).

It should also be no surprise that most of those goals were recorded at the Len Clay sports stadium (13).

The Miners have won three and drawn three in Obuasi this campaign and have conceded six goals there.

Milovan Circovic’s side love bouncing back from unfavourable positions. AshantiGold have clinched seven points after conceding the first goal at home this season.

Appiah McCarthy has been the team’s highest scorer at the Len Clay Stadium. He has netted three goals so far and all of them have been direct free kicks.

After a stuttering start to the campaign, Aduana Stars have joined the title conversation and can credit most of it to good performances at home.

In six games, the Ogya boys have recorded three wins and three draws.

Paa Kwesi Fabin’s side have not scored more than two goals in a home game this season.

Yahaya Mohammed has unsurprisingly been the chief marksman for the Dormaa-based side. He has netted five of his six league goals at home.

Elmina Sharks have clinched 16 points so far this season and 12 of them have come at home.

The Fearsome Sharks have won three games and drawn three at the Ndoum Sports stadium.

Yaw Acheampong’s side have not scored many goals at home this season (8) and have conceded five in the same number of games.

The club have not won a home game by a positive goal difference of two or more so far.

Benjamin Tweneboah has netted two goals for the Fearsome Sharks at home this campaign, the highest in the squad.

If teams cannot afford to score many goals, then they should do everything possible to stop their opponents from scoring.

Berekum Chelsea have executed this task to perfection.

They have netted just six goals at the Berekum Sports stadium but have managed to concede just two, the lowest among teams at home in the competition.

So far, the Blues have won three games and drawn three meaning they have earned 12 of their 13 total points at home.

Emmanuel Clottey has been their best finisher on their turf with two goals scored so far.

At the start of the campaign, Medeama were surprisingly off color and had seemingly forfeited their favourites tag.

A few weeks later, they are two points away from top four and five points behind league leaders Karela United.

The boost can be attributed to their strength at home. Medeama have earned 12 points at the Akoon Park so far.

It equates to three wins and three draws. The Mauve and Yellows have been strong defensively at home, conceding four goals.

On the offensive end, some improvement is needed as they have netted seven.