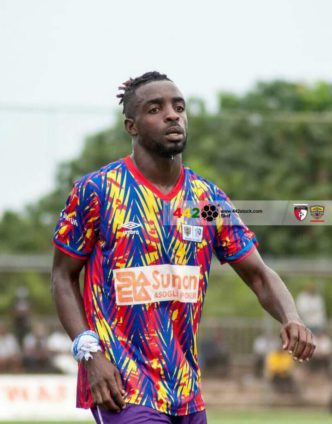 Reigning Ghana Premier League champions, Hearts of Oak recorded their first win of the 2021/22 season after beating Elmina Sharks by a goal to nil away from home.

The Rainbow club had not won any of their previous four games in the league prior to Wednesday’s game. Gladson Awako came from the bench to as he scored his first goal less than 10 minutes into his maiden appearance for the club.

Abdul Fatawu Issahaku continued his impressive run for Dreams FC, who triumphed over Karela United at the Theatre of Dreams.

Aduana Stars became the first side to record five consecutive wins in this season’s league following their 1-0 win over AshantiGold at the Len Clay Stadium.

Sam Adams scored the only goal of the game keep the momentum of the ‘Ogya’ boys.

Two goals from Kofi Owusu was enough for Berekum Chelsea who worsened the misery of WAFA, beating them with a 2-0 scoreline.

The game between Accra Lions and King Faisal was goalless while Asante Kotoko were held to a 1-1 draw at the Baba Yara Stadium by RTU.

Kotoko’s draw means they now drop to third position on the league table, three points behind King Faisal and Aduana, who are both on 17.