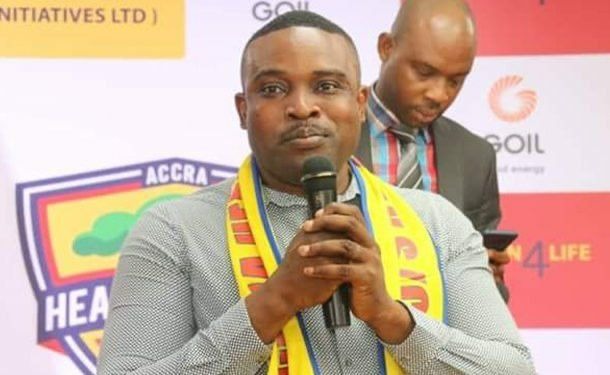 Chairman of the National Chapters Committee (NCC) of Accra Hearts of Oak, Elvis Herman Hesse, has described as ‘unfortunate’, the attribution of the club’s successes to Alhaji Akanbi and Vincent Sowah Odotei.

The Executive Chairman of the Club, Togbe Afede XIV, dedicated the successes of the Phobians in the last two years to the Board Members.

Alhaji Akanbi and Vincent Sowah Odotei were showered in praises for their exceptional contribution to Hearts of Oak, though the team has exited the CAF Confederation Cup.

Section of the Phobian fans had called for the resignation of the two Board Members for contributing to the team’s poor outing in Africa and their dismal campaign on the domestic scene so far.

But Togbe Afede rather hailed them, stressing their impact has brought a lot of successes to the Club in recent years.

The supporters’ chief, Herman Hesse, in an exclusive interview with LUV FM in Kumasi, disagreed with Togbe Afede, claiming the Board Chairman erred in failing to recognize the role of the supporters in telling the success story.

He says it was not fair to single out individuals for praises and overlook the impact of the supporters, the playing body and technical team when talking about achievements at Hearts of Oak.

“We do not have a problem with the position of the Board Chairman, he has every right to choose the kind of people that he would want around him but the only problem we had with the full press conference is that the fact that, the Board Chairman did not recognize the role of the supporters.

“That to us, was a bit unfortunate because at a point, he mentioned that if not for Alhaji Akanbi and Mr Odotei, we wouldn’t have won the 2020/21 league season, that was very unfortunate.

“Let me tell you this, a supporter got an accident on his way to Enchi after the [Bamako] game.

“This is what supporters do for the club so, during the press conference, the role of the supporters should have been mentioned,” he said.

DISCLAIMER: The Views, Comments, Opinions, Contributions and Statements made by Readers and Contributors on this platform do not necessarily represent the views or policy of Multimedia Group Limited.
Tags:
Elvis Herman Hesse
Hearts of Oak