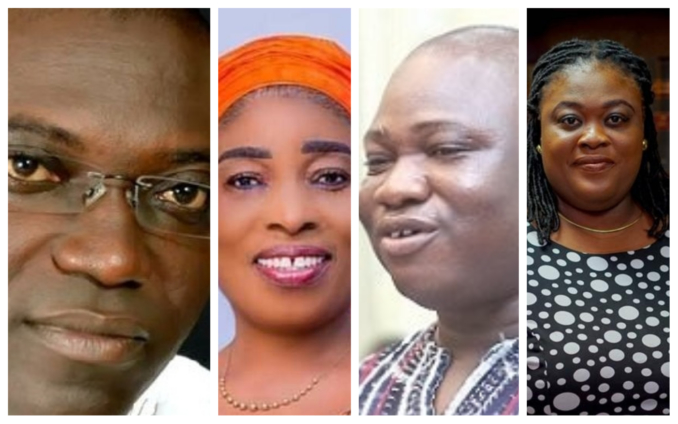 The final batch of Deputy Ministers-designate appointed by President Akufo-Addo have been approved by Parliament Wednesday, June 23.

The approval of the four nominees, however, did not come without some spectable on the Floor of the House earlier in the day.

Members of the Minority staged a walkout during proceedings in Parliament to approve the four nominees.

Deputy Minority Leader, James Klutse Avedzi, told the House that the Minority MPs could not participate in the approval process because NDC MPs on the Appointments Committee were absent during their vetting on June 11.

Initial reports revealed that the NDC boycotted the vetting owing to the unresolved violence that ensued at the Techiman South constituency during the 2020 general elections. However, the Minority, has revealed that their absence was as a result of a national duty.

Mr James Klutse Avedzi who is MP for Ketu North, told the House that the NDC legislators honoured the directive of Speaker Alban Bagbin to go plant trees in their constituencies and oversee the Green Ghana Day project meant to recover the country’s forest cover, hence their absence.

“The 11th of June, which was the day these four nominees were vetted, was the day the Rt. Hon. Speaker directed all of us to go to our constituencies to take part in the tree planting exercise.

Despite this revelation, the Majority side went ahead and approved the nominees after First Deputy Speaker Joseph Osei Owusu presented the committee’s report.

Meanwhile, the Minority is calling for a re-vetting of the four nominees approved today.

The MP for Tamale North, Alhassan Suhuyini, said the Chairman of the Appointments Committee has disrespected the directives of the Speaker by holding vetting for the four nominees, hence their request.

But the Majority side has opposed the request of the Minority stating that the Minority failed to take their jobs seriously.

The MP for Akim Abuakwa South Constituency, Samuel Atta Akyea told JoyNews: “What is the legal basis for that? When you are supposed to be a committed member of the Parliamentary Committee and you decide that you will abandon the work in the name of making Ghana Green. Why would you want to reverse the process?

“Is it that the Committee should run on your whims and caprices? No, they will not get it.”

Earlier this week, Parliament approved the vetting of some 12 appointtees. So far, all Deputy Ministers-designate and one Minister of State appointed by the President have been apporved.

DISCLAIMER: The Views, Comments, Opinions, Contributions and Statements made by Readers and Contributors on this platform do not necessarily represent the views or policy of Multimedia Group Limited.
Tags:
Appointments Committee
Diana Asonaba Dapaah
Martin Adjei Mensah Korsah
Minority and Majority
Parliament