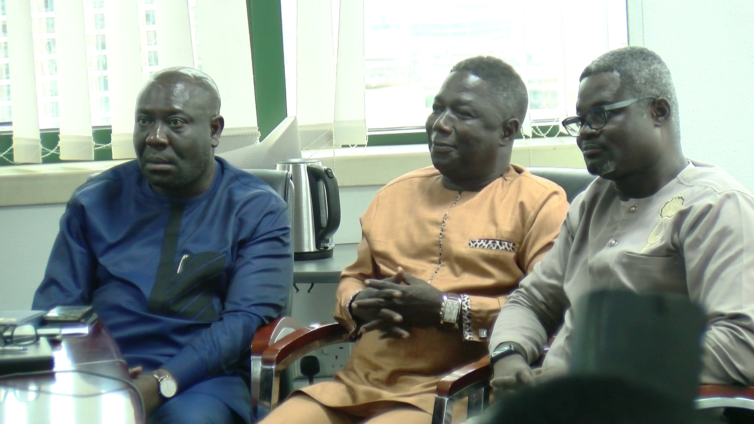 Executive Chairman at Hearts of Oak, Togbe Afede XIV, has passed a vote of confidence on board members, Alhaji Akanbi and Vincent Sowah Odotei.

The two administrators, who have been at Hearts for close to 11 years, have recently come under increased pressure from fans calling for them to step down from the club.

The duo have been blamed for the team’s consistent underperformance, highlighted by their failure to qualify to the group stages of CAF tournaments.

Another Board Member, Dr. Nyaho Tamakloe, has been accused of instigating the unfair sacking of the club’s former coach, Samuel Boadu.

However, Odotei and Akambi have received huge boosts about their future with the club, as Togbe Afede XIV identified them as key members of his tenure at the club.

“I have been in leadership for many years now, I have founded many companies which I’ve led and I can say without any doubt, the likes of Akanbi and Odotei are very rare. Sometimes we don’t like in this country those who are forthright and speak the truth. Akanbi works with a passion that sometimes surprises me,” Togbe Afede said in a press conference.

Highlighting their importance, Togbe also indicated the heroics of Hearts’ 21st league title will have been impossible without the duo, and particularly heaped praise on Akanbi for the progress of work at Hearts’ Pobiman Complex.

“We’ve been having difficulties implementing our Pobiman project. We had a professional in charge of supervising that place, sometimes he could go for weeks without updating me on progress. So we told Akambi, ‘just help us. Make sure we finish Pobiman by the end of the year. Sometimes I call Akambi at 6:30am and he’s already at the site – at a time his critics are fast asleep.”

“When it comes to ensuring value for money, I have not seen anybody like Akanbi and Odotei.

“We never knew Pobiman was so flood-prone, then we realised we had to invest big in drainage – something we had not factored into our plans. So we had an expert from one of the municipal assemblies who knew the area very well.

“He did a survey and gave us a voluminous report, with a cost of GHC2.5m. Immediately I told the board we can’t invest that sum into it and still complete the project, but under Akambi’s supervision we are working on the drainage for about GHC500,000 – 20% of the original estimate.”

Speaking to JoySports on the side of a press conference, Togbe Afede credited Dr. Tamakloe for being an ambassador of the club and making personal sacrifices to oversee progress at the Pobiman complex.

DISCLAIMER: The Views, Comments, Opinions, Contributions and Statements made by Readers and Contributors on this platform do not necessarily represent the views or policy of Multimedia Group Limited.
Tags:
Akambi
Hearts of Oak
Odotei Sowah
Togbe Afede