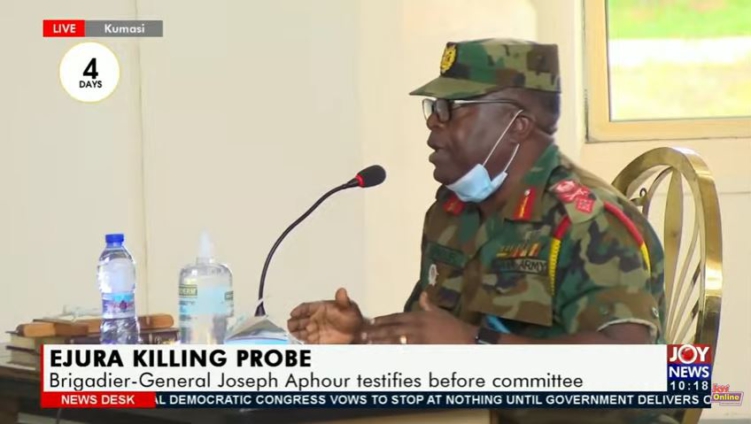 The General Officer Commanding the Central Command of the Ghana Armed Forces has revealed that his men did not find out whether the protesting youth of Ejura, who were wounded during the clash on June 29, had weapons.

Brigadier-General Joseph Aphour made the disclosure on Wednesday, July 7, when he appeared before the Three-Member Committee investigating the chaos which led to the death of two persons and four others injured in Ejura Sekyeredumase.

“The wounded, did your men find them with any lethal weapon at the scene,” a member of the Committee asked.

“My Lord, I think we didn’t follow up to find out whether those who were wounded (carried weapons on them),” Brigadier-General Joseph Aphour replied.

Also, Brigadier-General Joseph Aphour affirmed that the approach adopted by the Military personnel ensured calmness, stating that “the crowd dispersed and it was under control.”

According to him, if the initial steps to restore calm was unsuccessful, the military “would have even fired more.”

Brigadier-General Joseph Aphour agreed with a suggestion by a Committee member that an ambulance should have been arranged to ensure civilians or military personnel who sustained injuries were treated at the scene, in case of any eventuality.

The Commanding Officer of 4th Battalion, Lt Col Kwasi Ware Peprah who was also interrogated today, however, presented a different account of the disturbance that took place at Ejura on Tuesday, June 29.

Some protestors according to him, were wielding guns and firing upon the arrival of the security operatives at the scene.

“As a matter of fact, I even suspect the weapons that fired from the protesters must have hit one of them. You see, the soldiers started firing into the air, if you are not a professional and there is another gun firing you wouldn’t know. And that is how come some people are saying that they [the protestors] were not handling weapons.

“When an M16 rifle fires, I know.  When a G3 rifle fires, I know but the ordinary citizen and the media wouldn’t know. All you will hear is gunshots into the air. And since it started when the soldiers came, you will assume that it is only soldiers who are firing,” he said.

The Committee is chaired by George Kingsley Koomson, Justice of the Court of Appeal. The members are; Security Analyst, Dr Vladimir Antwi Danso, Juliet Amoah, Executive Director of Penplusbyte, a civil society organisation.