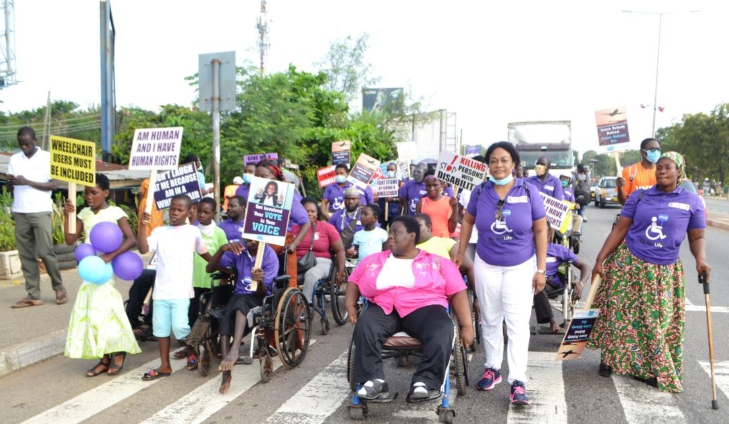 The Henry Djaba Memorial Foundation with support from the United Nations Population Fund (UNFPA) has launched a national campaign to mobilise wheelchairs and walking aids for 187,522 Persons with Disability (PWDs).

The campaign dubbed: “1000 Wheelchairs and Walking Aids – fit for life,” aims at mobilising at least 16000 wheelchairs and walking aids to mitigate mobility difficulties of PWDs.

The Executive Director of Henry Djaba Memorial Foundation, Dr. Otiko Afisah Djaba, during a float to herald the 1000 wheelchair campaign launch, called for an inclusive society where everyone’s rights were respected.

“You cannot build a nation by leaving some people out, since leaving them out means you’re not serious about building your nation,

“When you help a person with a disability, you’re helping in nation-building,” she said.

Dr. Djaba said the Foundation would continue to mobilise all efforts, locally and internationally, to get wheelchairs and walking aids for every person with mobility disability in the country.

She urged Ghanaians to change attitudes towards PWDs and join the growing movement to ensure their comfort and well-being.

Disability rights advocates have lauded the campaign initiative, saying it would contribute immensely towards building an equal and equitable society.

In that social order, advocates believe there would be greater respect for the rights and interests of every person, irrespective of gender, stature or social class, creed or ethnic origin.

Addressing participants at the launch in Accra, a Lecturer at the University of Ghana, Dr Augustina Naami, said the campaign would help ease the myriad of challenges people with disability endured.

“The paths leading to houses of people who use wheelchairs are very rough, not tarred, there are muds on the road …they find it difficult to come out on their own and carry out their activities,” she said.

Dr. Naami, who is also a wheelchair user, called on all to support the campaign so PWDs get out of their present situations and take charge of their lives.

“Wheelchair is a necessity to help them, [persons with mobility challenges] engage in doing things that will improve their livelihoods, and take care of others, it is a basic necessity, that’s what they depend on for movement.”

“Today, the misconception, the discrimination about PWDs have not been fully eliminated but have been reduced through advocacy efforts of partners,

“The country is beginning to see a paradigm shift towards meeting the needs of all to ensure inclusiveness in development,” Mr. Adeniyi said.

The Henry Djaba Foundation is a Gender/Disability Based Organization with a core mission of working towards a socio-economic transformation of PWDs and empowerment of women and children.