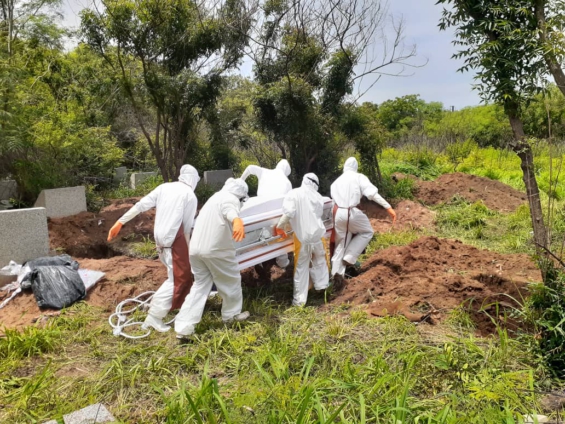 Five people who succumbed to the novel coronavirus disease were buried on June 11, 2020.

The deceased form part of the 48 people reported dead from the disease which has so far registered 10,358 cases in Ghana.

Personnel from the Environmental Health Directorate of the Accra Metropolitan Assembly (AMA) laid the five to rest at the Awudome Cemetery here in Accra.

JoyNews‘ Komla Adom was granted exclusive access to a never-aired burial process as the experts followed protocols to the latter in transporting the dead to their final resting place.

Ahead of the journey, Director of Public Health at the AMA Florence Kuukyi explained that it is their “duty to give the persons a dignified burial” adding that “we have 11 people that are going to do this work so we will dispatch part of them to the cemetery and part to the mortuary.”

She added that 32 families have come to register for the burial of the deceased relatives.

“We have buried 16 for now and today we are burying five,” she said.

En route the cemetery after picking three of the 5 bodies from the 37 Military Hospital morgue, member of the AMA team, Joseph Asitanga told JoyNews “after that we will go for two bodies at the Ridge Hospital and do same to them.”

The environmental health worker, however, expressed worry over the attention drawn to the team while transporting bodies to the burial sites as some of the personnel sit in the buckets openly at the back of a pick-up truck in their PPEs.

They called for the provision of logistics such as suitable vehicles to reduce attention attracted by their movement and also curb stigmatisation.

At the Awudome cemetery, the personnel, adjusting their PPEs in position, looked poised as they readied to execute the final phase of the exercise – the burial itself.

As Asintanga’s team cleared the mounds and lowered the coffins one after the other, he told Komla Adom “this is terrible. Its a challenge and that is a call to duty…”

He also used the opportunity to caution the general public to stay safe as the novel coronavirus disease, he emphasised, is real.

A few family members were, however, allowed to pay their last respect in a socially distant manner under strict supervision.