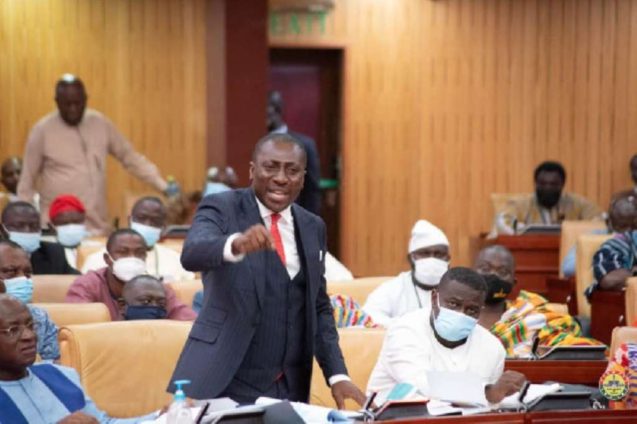 Deputy Majority Leader, Alexander Afenyo-Markin wants the Works and Housing Minister, Francis Asenso-Boakye to brief the House on the commencement of the Blekusu sea defense project Phase 2 in the Volta Region.

Addressing the media after Tuesday’s proceedings, the Efutu legislator said filing his question will create a platform for the sector minister to outline a comprehensive plan for the construction of the project.

He also added that it will pave way for the adoption of a strategy in ensuring the Finance Ministry makes funds available for the project.

“I believe that as a House, once this is brought to the mainstream and the Minister comes to answer questions, we will then be able to hold the Minister’s feet to the fire regarding the answers he would give and then push the Finance Ministry to make available funds to finance the projects.

“I am for the real practical solution and not political rhetoric. And I believe that when we are through with the budget, since it is an urgent question we will be able to hear the minister on that,” he told the media.

His urgent question comes after a tidal wave hit some communities along the coast in the Volta Region.

Many residents have been displaced following the incident and properties worth hundreds of Ghana cedis have been destroyed by the phenomenon.

Last week, Mr Afenyo-Markin during a press conference on the Keta tidal waves, showed a picture of some heavy-duty trucks purportedly loading sand from the shores of Keta in the Volta Region.

This assertion was firmly disputed by the opposition National Democratic Congress (NDC). The South Dayi MP, Nelson-Rockson Dafeamekpor challenged the Deputy Majority leader, arguing that the picture he portrayed does not have anything to do with Keta.

Subsequently, the photo alleged to be of sand-winning activities in Keta in the Volta Region turned out to be false.

In view of this, Mr Afenyo-Markin rendered an unqualified apology for the use of a false photo to depict the sand-wining activities at Keta.

“We all make mistakes sometimes. I couldn’t have reasonably taken that step to mislead. If it were so, I wouldn’t have handed over the entire research findings to the media,” he said.